Let's compare 8 Planets of the Solar System in size. This simple funny educational video helps to imagine sizes of our planets for kids of all ages. First we are learning the order from the Sun and set all the planets in SIZES ORDER. Kids can help to find the corresponding house for each planet.
The smallest planet in the Solar System is Mercury, next one in size is Mars, Venus is much bigger, our Earth is almost the same size, next one is a giant Neptune, Uranus is a little bigger, then Saturn, and biggest planet of the Solar System is Jupiter. However all the planets are small babies when you see how huge the Sun is!
Excellent for the preschool, kindergarten or elementary school lessons.
Hope you can learn something new and at the same time smile when you watch our video! Enjoy and subscribe to watch more!
How to learn the order of the planets?
Just remember:
My Mercury
Very Venus
Educated Earth
Mom Mars
Just Jupiter
Served Saturn
Us Uranus
Nachos Neptune

But where is Pluto? Pluto is a dwarf planet in the Kuiper belt, a ring of bodies beyond Neptune. Pluto was discovered by Clyde Tombaugh in 1930 and was originally considered to be the ninth planet from the Sun. Pluto is very small, only about half the width of the United States, that's the main reason why Pluto was relegated to "dwarf-planet" status by the International Astronomical Union in 2006.
==========================================
Subscribe to watch upcoming videos:
http://www.youtube.com/channel/UCpFsQcFDd6UxnzFuXn1gDzg?sub_confirmation=1

Music is from epidemicsound.com - one of the best resources online. 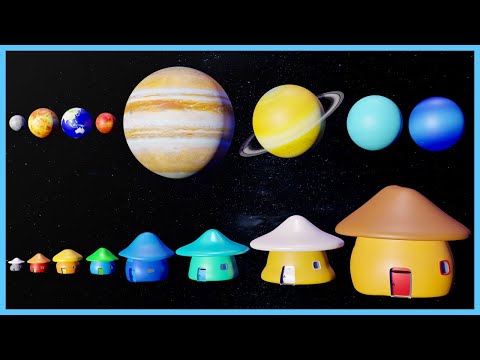